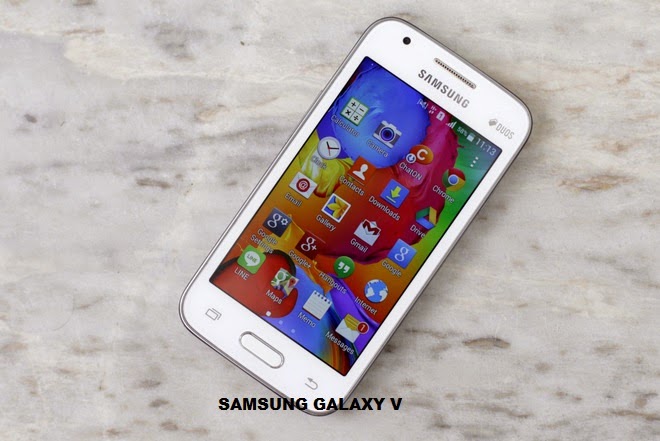 Samsung Electronics has launched their newest product, namely samsung galaxy v. This smartphone was launched for the first time in Vietnam and in Indonesia itself is already available.


Samsung Galaxy V is a medium class cellphone with affordable Samsung Galaxy V prices for lower middle class people, because it is proven that in Indonesia the best-selling cellphones are priced at 2 million and below.


like the samsung galaxy s2 which is still similar to the samsung galaxy v. Samsung Galaxy V is able to present a variety of features that are quite capable. The screen itself is a 4-inch display panel with FWVGA resolution of 854 x 480 pixels which will be supported by TFT capacitive touch screen type technology which has a density of 245 dpi.


Besides that, for software and hardware matters, there is no need to doubt, namely by carrying an operating system that is already running with the Android KitKat OS.

For the performance sector, it will be powered by the Spreadtrum SC6815 Chipset which has a dual core processor with a speed of 1.2 GHz, 512 MB RAM, and a Mali-400 GPU graphics processor.


For the camera sector, the Samsung Galaxy V relies on a 3 MP rear camera with a resolution of 2048 x 1536 pixels which is supported by the LED flash lighting feature. Unfortunately for those of you who like selfie photos, this phone does not have a front camera. Of course this is a separate drawback found in the Galaxy V.


Other specifications include Dual SIM features with a network that supports 3G HSPA, 4 GB of internal data storage which can be expanded up to 32 GB with a microSD slot, Bluetooth data connectivity, microUSB and Wi-Fi, and 1500 mAh battery power.

samsung galaxy v price around IDR 1.2 million. Of course, with a fairly affordable price and pretty good and simple specifications, it is predicted that the Samsung Galaxy V will get quite a positive response from gadget consumers in Indonesia.

Get Free Online Cooking Classes
Are you looking for resources on how to cook online that will help you in the culinary arts?
Yes, Please